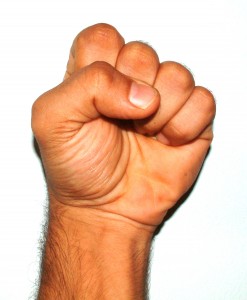 In plain English, a battery is any unwanted and unjustified touching or intentionally causing bodily harm to another, whereas an assault is when a person uses words, actions, and weapons to put another in imminent fear of harm. It is the intentional, unlawful threat by word or act to do violence to the person of another, coupled with an apparent ability to do so, and doing some act which creates a well-founded fear in such other person that such violence is imminent (Florida Statutes 784.011)

An Aggravated Assault occurs when a weapon is used as an instrument to create a fear in another that his safety was being endangered.

An Aggravated Battery occurs if a person is seriously injured or hit with a weapon even if the injury is minor.

No actual touching necessary to constitute assault or battery
A person can be arrested and convicted of battery, even if the victim was never touched and if something the person is holding or is inside of is touched.  As long ago as 1784, the United States Supreme Court held that even striking one’s cane and not the person himself may constitute a battery (Respublica v. DeLongchamps (1784, U.S. Supreme Court) ).

In 1984, Florida’s 2nd District Court of Appeals upheld one Defendant’s conviction of aggravated battery, although the defendant’s blade stabbed only the money bag that the victim was holding, and not the victim himself (Malczewski v. State, 444 So.2d 1096 (Fla. 2nd DCA 1984)).

As you can see, the law defines what is and is not assault and battery.  Not every accusation of assault and battery has a factual or legal basis.  Let me put my criminal trial expertise to work for you, reviewing your facts against current law, helping to make sure that your rights are protected to the fullest extent of the law, and ensuring that your side of the story gets heard.

Other assault and battery cases of note:

“The word “person” in the statute includes an object that has such an intimate connection with the person as to be regarded as a part or extension of the person, such as clothing or an object held by the person.” Malczewski v. State, 444 So.2d 1096, 1099 (Fla. 2d DCA 1984)

Powered by WordPress and WordPress Theme created with Artisteer by Jason Kozdra.